Believing in a Second Chance

At the heart of the Relationship Development Intervention program is belief in change. Even before scientific findings confirmed it, Dr. Gutstein and his wife Dr. Sheely believed that the brain of a child on the autism spectrum had a great capacity for change. While looking at the current state of autism therapy, they wondered if this was the best available. They wondered if there could be such a thing as a second chance. They wondered if there would be a therapy that would not only change the observable behavior of a child on the spectrum, but something that could actually change the brain. They wanted to develop a therapy that would allow a child to have access to the most important and meaningful joy in life- guiding relationships.

Over many years of development and research, the RDI® program was born. RDI®  has been developed with neuro-typical human development in mind and goals and milestones follow that natural pattern. The problem is that as an infant on the autism spectrum grows, instead of becoming more open to the world and embracing change and challenge, withdrawal occurs in an attempt to keep the world more predictable and static. In response to this, parents suffer confusion and are often unsure of how to proceed to teach their child that does not seem open to guidance. The RDI® program was developed for a child and his/her parents to have another chance at accessing that precious, sacred relationship.

Dynamic Intelligence is developed through MindGuiding, which is the ability to develop our child’s mind to be geared specifically towards the culture in which we are living. When we refer to the mind, this does not simply refer to static accumulation of information or IQ score. In thinking about the mind, we are thinking about mental processes which allow us to:

The graphic below shows the steps that a child in the RDI® program will go through as they become more able to think independently. Parents and their children may move through some steps quickly, while others may take more time, but it is a very systematic process that doesn’t just have the illusion of change from the outside, but is actually changing the child’s brain from the inside. 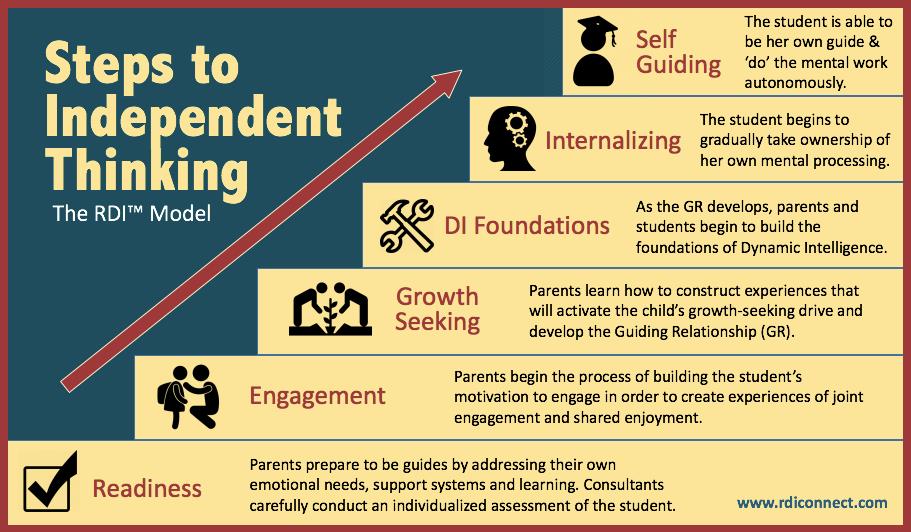 To learn more about Relationship Development Intervention and how Therapeutic Approach to Growth can help you and your child begin the amazing journey of a guiding relationship, please contact Amabelle at (858) 689-2027 to schedule a complimentary consultation.

About the Author: Meghan Shanahan